What Awaits You in the Afterlife?

Heaven – An Unexpected Journey. (Book) Unsaved, and facing death, Jim Woodford cried out for God to forgive him. Jim died, but it was not his time — Jesus sent him back, and he is here to tell you it’s not too late for you.

Jim’s journey through a tunnel of light brought him to the edge of Heaven and Hell. The darkness and the sound of Hell’s gates were real, but so was his angelic rescue from a creature who called him by name. Jim shares the experiences of singing flowers, God’s “sticky love” and meeting Jesus, who silently read the book of his life to him. Jim was ashamed that his worldly accomplishments amounted to so little! Jim is changing that now, and his book will change you! 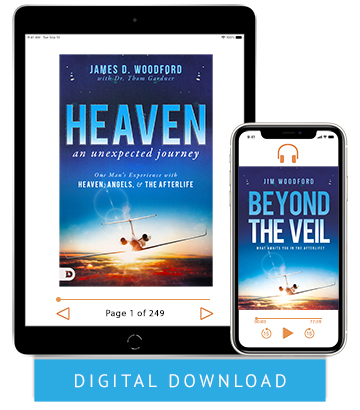 Beyond the Veil. (3-part Audio Series). The time to consider the realities of Heaven and Hell is now. Jim loves to share the vivid sights and sounds of Heaven and what it’s like to be around angels. He also shares his too close encounter with Hell. Jim says you can take comfort in the six simple words that propelled him into the presence of Jesus—who sent Jim back for good reason!

Jim Woodford was a successful commercial airline pilot by career standards but he lived his life apart from God. His experiences with death, Hell, Heaven and the goodness of God include seeing the book of his life and an encounter with Jesus, then being sent back to earth.

Unsaved, and facing death, Jim Woodford cried out to God before he died. God sent him back to tell you it’s not too late for you.