Eat, Sleep, Prophesy, Repeat is a guide for believers who want to grow in hearing the voice of God. Established voice and author Tomi Arayomi shares personal revelations and stories of his journey—and how he was schooled in just what the Lord was saying to him.

The prophetic is for everyone, and the Bible says it plainly in John 10:27, “My sheep hear my voice.” This book promises Tomi’s practical insights, and it answers questions every sincere believer will come to ask: 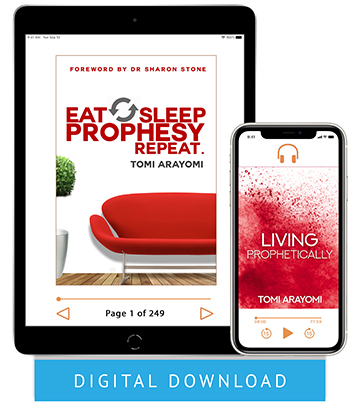 Tomi Arayomi has been called on by heads of state, monarchs and queens for his apostolic and prophetic anointing. He says we must learn to live prophetically because that is how God gets things done.

God wants good communication with every believer, and in Tomi’s 3-part audio series, Living Prophetically, he will share with you:

Tomi says leave the agenda to God! He will direct you.

Tomi Arayomi was commissioned under Christian International by Dr Bill Hamon and Dr. Sharon Stone. Tomi has had favor with government leaders worldwide, and also with the United Nations, where he is a frequent guest.