Understanding is a Wellspring of Life 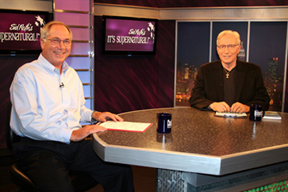 Many have noted that unforgiveness is a roadblock to supernatural healing. However, Dr. Art Mathias is one of the first to demonstrate that when we understand and apply the principles of Biblical forgiveness, the Lord’s healing will come to us very easily. His simple approach has set thousands free from suffering and disability. Sid Roth recently interviewed him for the Messianic Vision radio program and said, “What Art has discovered provides a vital key for healing that everyone should know. His teaching has changed my life.”(Sid also interviewed Art for television here.)

Art discovered these principles as part of his own healing journey. Faced with a terminal illness, he searched the Bible for scriptures about healing. In particular, he read this in James 5:16, “And the prayer of faith shall save the sick, and the Lord shall raise him up; and if he has committed sins, they shall be forgiven him.”

Art recognized that forgiveness of sins is tied to faith for physical healing. As he studied scriptures proving that the body reflects our spiritual health, he learned that subtle sins such as resentment, shame, guilt and worry give the devil a way to attack us, and can also block the flow of the Lord’s healing power.

Art was completely healed when he applied simple principles found in the Bible. These principles have formed the basis for Wellspring Ministries, an outreach that has brought healing from all kinds of mental and physical disorders. His experience and a brief summary of his teaching follow in this two-part series.

Two Years To Live
In 1997 Art Matthias was very sick. His immune system seemed to have turned upon itself. His vital organs were in danger of shutting down and he was in constant pain.

Art said, “Following surgery to repair a neck injury, I suddenly became allergic to almost everything. My skin grew so sensitive that it hurt to put on clothing. I could only eat 4 foods, and it hurt to eat even those foods. The nerves in my toes and fingers grew numb and were dying, and the numbness was progressing up my arms and legs. Doctors at the Mayo Clinic in Scottsdale, AZ diagnosed this disorder as small fiber neuropathy. They told me it would progress until it reached a vital organ, and estimated I had two years before it killed me.”

Art said, “The pain was horrible, but even worse was my level of fear. Something I did not understand and could not stop was slowly killing me. But, God had a plan. At just about the darkest hour of my life, my sister was supernaturally healed of breast tumors. She explained that she had gone to a divine healing seminar, and that when she got rid of buried resentments in her heart, the tumors just disappeared. She recommended that I try it.Art asked his church elders to pray for him. In addition, he tried many kinds of medical treatment and a great many alternative treatments, but nothing stopped the progress of the neuropathy.

“I was quite skeptical for several reasons. In the first place, I had been a Christian all my life, even gone to a Christian college and majored in Bible, and not only had I not heard of being healed by forgiveness, I did not think I had any sins bad enough to kill me. In the second place, I believed, as do many, that we received total forgiveness when we accepted the Messiah as our Savior. So whatever sins I did have were covered by the blood of Jesus. However, I was so desperate that I decided to search the Bible and see what it said about health.”

Our Bodies Reflect Our Spiritual Health
“The Bible teaches that our bodies are actually barometers for what is going on spiritually in our lives. In 3 John 1:2, we read, “Beloved, I wish above all things that you might prosper and be in health, even as your soul prospers.” This verse should be a guiding light for anyone who seeks healing. God wants us to be healthy, but our soul must also be doing well. Hidden, subtle sin can separate us from the promises of God.

“There are many passages that point to the spirit-body relationship. However, my health began to change when I discovered Hebrews 12:12-16: “Wherefore lift up the hands which hang down, and the feeble knees; And make straight paths for your feet, lest that which is lame be turned out of the way; but let it rather be healed. Follow peace with all men, and holiness, without which no man shall see the Lord: Looking diligently lest any man fail of the grace of God; lest any root of bitterness springing up trouble you, and thereby many be defiled.

“This passage contains a powerful truth – that roots of bitterness are buried deep inside us. If we don’t dig them out, we literally risk missing the grace of God. In my heart I knew that this was the truth I needed to be healed. With the direction of the Holy Spirit, I looked diligently inside myself, and confronted my own buried resentment, forgotten offenses and deep-seated fears.

“I began to work through all my memories as the Holy Spirit brought them to my mind. For each one, I asked God to forgive me and in some cases to forgive another person who had hurt or offended me. Although I have since learned that there is a little more to it, God honored the intent of my heart, and I immediately began to feel better.

We Battle Against Spiritual Powers
“I was not totally recovered, however, so I kept searching the scriptures. What I next uncovered was the importance of Satan’s power against us, as it says in Ephesians 6:12, “We do not war against flesh and blood but against principalities, against powers, against the rulers of the darkness of this world, and against spiritual wickedness in high places.”

“Although I knew that Jesus cast demon spirits out of many, including a spirit of infirmity, I had always believed that Christians could not be troubled by evil spirits. However, I did know that I was controlled by fear of the future due to my illness. I remembered that Paul referred to a spirit of fear in 2 Tim 1:16, and that James 4:7 advises to ‘resist the devil and he shall flee from you.’ I realized that I also had to battle the devil to obtain my healing.

I Was Completely Healed
“In January 1999, I had forgiven all my past hurts and resentments, and I was ready to confront the devil. I cancelled all of Satan’s assignments against me and commanded the allergies and neuropathy to leave in the name of Jesus. I was immediately healed. God healed my nerve damage, restored my right arm and shoulder completely, and healed all my allergies. My health was completely restored!

Understanding Is a Wellspring of Life
“People who knew me were astonished. They had known how sick I was. Now they could see my glowing good health, and they wanted me to pray for them. I began to work with these friends individually. The word spread quickly to others because the results were so plainly visible. People were getting healed as they learned how to repent and forgive themselves, and the people in their lives who had hurt or offended them.

“I started teaching classes and training others to bring healing through forgiveness. We quickly realized that the same principles apply, whatever the toxic emotion might be. Gradually we grew into a ministry that serves thousands of people a year through direct counseling, outreach ministry and classes. We named our ministry, Wellspring Ministry, because “Understanding is a wellspring of life,” Proverbs 16:22.

75 % of People Are Healed
“We have documented results of almost every kind of disease being healed with this approach, including lupus, multiple sclerosis, cancer, heart disease, autism, mental illness, addictions, hepatitis c, chronic fatigue syndrome and fibromyalgia. We have seen creative miracles that include sight being restored to the blind and deaf people receiving their healing.

“There is nothing that cannot be healed when we get our hearts right with God. 75% of people who come to our ministry are completely healed. The 25% that are not healed are the ones not willing to deal with the sin in their hearts. There is no disease, no condition and no disorder that resists the healing power of God when we get rid of our inner fears, resentments and hurts. Repentance and forgiveness are the key.

“When I go someplace and teach this, people in the audience receive healing while they sit there, just as they realize this and release their own bitterness. For example, a man had lost his sight when a brake hose broke spraying his eyes with caustic fluid. He received his vision back completely. Another man ended a lifetime of severe migraine headaches when he released buried feelings about his son’s death. In addition to healing of diseases and disabilities, 16 have received healing from deafness and 8 have received their sight. There is nothing that God cannot heal if we will only be obedient and forgive, releasing our hurts, resentments, fears, guilt and shame.”

Art has written a book called Biblical Foundations of Freedom in which he details the scriptures that relate to healing. Go here to watch Art Mathias’ interview with Sid Roth.