The River of Zion – From Israel to Azusa to Today (Digital Download) by Tommy Welchel & Jody Keck; Code: 3892D

The River of Zion – From Israel to Azusa to Today (Digital Download) by Tommy Welchel & Jody Keck; Code: 3892D

Someone had to carry the testimony of Azusa Street.

Even our Gospels began with spoken testimonies before they were recorded in written form. For reasons unknown, Tommy Welchel came to be the person to hear firsthand the miraculous surviving accounts of the revival at Azusa Street. Only after many years did Tommy begin to share them.

Now, a century later, Tommy’s witness has been inherited by Jody Keck. The stories testify to the power and goodness of God and the unfulfilled revival spoken of by the prophet Joel. 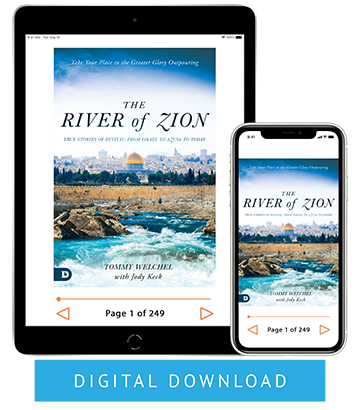 Azusa Street was simply Jesus at work in our day, and like gospel accounts its stories have the power to bless you.

More than that, Israel’s destiny and Joel’s words give The River of Zion a place in the prophetic purposes of God. Those purposes include you, Israel and the millions of believers soon to enter the Kingdom.