When Heaven Comes to You

Rabbi Jason Sobel’s latest book, Aligning with God’s Appointed Times, is both an invitation and an open door.

Rabbi Jason shows you that what began with a commandment was never intended to overshadow the joy of drawing near to God.

Jason goes on to describe how the Jewish roots of your faith are grounded in God’s calendar. There are traditions, but it is God that you are seeking, and He wants to meet with you!

And, he says, the sheer scale of these family gatherings points directly to the awesomeness of your covenant God. Even when observed at home! 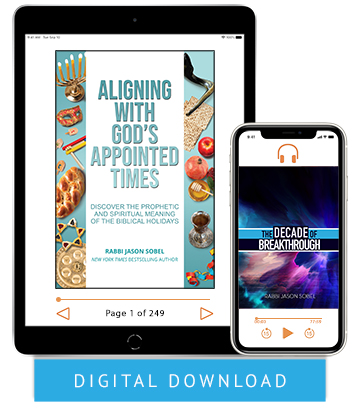 Rabbi Jason also explores God’s larger seasons according to the Hebrew calendar. In The Decade of Breakthrough (3-part audio series) Jason looks at the decade we are living in now. Jason helps you to:

Jason releases his own declarations and blessings throughout this series!

Rabbi Jason Sobel is the founder of Fusion Global, a ministry that seeks to bring people into the full inheritance of their faith.

Only God’s blessings are unto a thousand generations!